So, the task to create a video recording tutorial was very challenging for me.

I was not ready enough to use screen-o-Matic. Despite the fact that I had watched all the trials of

my course mates, I couldn't manage to create my tutorial so quickly as I wanted. However, now I have an account on screencast-o-Matic and on Badger, so I've gained basic skills to use them and I need to train these skills as I will need them for creating my course. I was very nervous, however, I am proud of myself at the moment. I enjoyed having experienced a "trial and error" method

I am so frustrated. It took me nearly all day to understand what hyperlink means and how to manage.

Thanks to Ludmila I coped with getting Screencast-o-Matic account. However,  all my trials to record failed.

I couldn't manage to record the screen. It's so frustrating......I am wondering whether I will be able to continue the course?

As they say, a good beginning is a good ending. This is the case when I have a chance to check to what extent it is true. I didn't manage to start the course on time, missed the first live session ... The end of the 1st week is approaching and I seem to be leg behind, to which, honestly, I am not used to be. I am a bit frustrated as I didn't manage to understand the interface immediately after logging in. Only today, on the 6th day of the course I've managed to clear up what and how to do thanks to prof. Nellie Deutch videos. However, it's not clear enough to me how to make comments on the participants' entries in the Introduction part. Despite these challenges, I am happy to be on this course, as I see from the participants' posts that I'm in the right place to learn from the like mind experienced and committed professionals as well as to share with them my ideas and concerns.

So, the beginning of my learning experience isn't so good as I would like to have, however, I will do my best to cope with this challenge.


I will introduce myself by telling two things about Sheryl Ann McCoy that are true and one...not so much. Please read my introduction and comment in the Moodle MOOC 14 Introduction forum. After the third person makes a response, I'll share which story is not true. Good luck with your guesses.


Fake or Real #1 When I first began teaching Earth Science, I learned of the VLA, located near Socorro, New Mexico, and New Mexico Mining and Technology University. I always wanted to go there, so I planned a trip. My family and I traveled what I call the "Volcano Tour". After traveling to through the volcano flats of Northeastern New Mexico, we visited the Clovis Man Museum in Clovis, NM. After that, we traveled to many sites along the way, forts, museums, and other exhibits until we arrived at Roswell, New Mexico. We collected "Pecos Diamonds" on a bluff above the "Bottomless Lakes" located just east of Roswell. We ended our visit to Roswell by going to the UFO Museum. 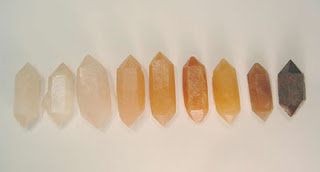 Fake or Real #2 WaterFront, the TV Series, started in February of 1954, and I was born in October 1954. While my mother was waiting for me to arrive, she was watching a really exciting show called WaterFront. The WaterFront TV Series revolved around Captain John Herrick, his family, friends, and others on the waterfront and his tugboat, the "Cheryl Ann". It was a 30-minute crime solving movie. 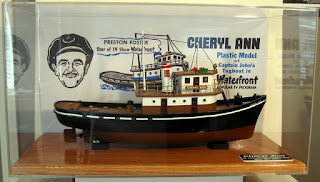 WaterFront was more a family show that happened to be a "whodunit". My mother loved mysteries. She'd read all the Agatha Christie novels and other similar novels. Even today, she enjoys watching a good mystery. While I was growing up, I watched many of these movies and TV shows, which is probably why I like mysteries also.


Mother told me that I was named after the tugboat "Cheryl Ann" in the WaterFront TV show. I thought it was cool, but other kids can be cruel if they find out you're named after a tugboat. She loved the mystery surrounding the family and their tugboat who helped save lives and fight crime. I'll take that namesake any day.


Here is a segment from the second season:


This TV show was so popular, that models of the tugboat were sold for quite some time. Here is a picture of a special edition model that was well-made. 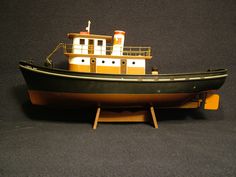 WaterFront may have been a very popular movie for women who were mystery buffs. It seems that many other women around my age were named Cheryl Ann. My mother didn't like C at the beginning of my name, so she changed it to Sheryl Ann. That's my name, Sheryl Ann McCoy.


Fake or Real #3 After I graduated from college and moved to Louisiana, I spent my first summer hunting alligators in the Three Rivers Area. It was quite an experience. Most of the time a group of us lived on a flatboat in the marshes. The biting and stinging insects were terrible until we developed our screen system. We set up mosquito netting to keep the insects at bay. Every day we fished for our meals and foraged for edible plants. It was an experience that I will never forget.

Portfolio Export
by Nellie Deutsch - Friday, 10 May 2019, 7:35 AM
Anyone in the world
Permalink
Show commentsComments (0)

Portfolio Export
by Zahra Shafiee - Friday, 10 May 2019, 7:27 AM
Anyone in the world
Permalink
Show commentsComments (0)

I added a plugin (activity) to the course. You may try it out here as a student and in the teacher practice area (week 2) or in the manager and course practice areas in weeks 3 and 4.